Wedding Traditions – Where Did They Come From?

Home / Blog / Wedding Cake / Wedding Traditions – Where Did They Come From? 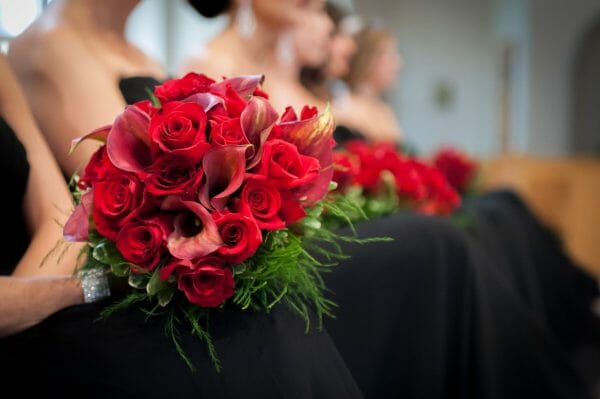 If you have ever attended a wedding, then you have seen wedding traditions.  You probably never thought about why does the bride where white? Why does the groom have his own cake? Bury the Bourbon, what for? Why do the bride and groom cut the cake at the reception? So let’s take a look at some of most popular wedding traditions.  Let me help you understand where they came from and why we do them.

Bridesmaids – where did they originate from?

Have you ever been curious as to why we ask our friends to wear matching dresses and help the bride get ready for her big day? Originally bridesmaids did not wear colored gowns that would help the bride stand out.  Bridesmaids originally wore gowns that were very similar to the bride.  This was to confuse her exes and outsmart the evil spirits.  By wearing a gown similar to the bride, the evil spirits would not know who was actually getting married.

In early Roman era, it was the bridesmaids’ duty to surround the bride in a protective shield as they walked into the grooms village. The maids were dressed similar to the bride and if someone was to try to harm the bride, it was the maids’ duty to protect the bride at all costs! Maybe even with their life. Aren’t you glad that today, you just have to carry a bouquet and smile – not fight off evil or exes?

Later the tradition changed to the Ring Cake Push.  What is the cake push you might ask?  Well, I am going to be honest, I had no idea about this tradition – however, it does lead to why we eat cake.  The cake push is where the bride push pieces of her wedding cake through her new wedding ring and hand it out to the guests.  The guests do not eat this, they take it home, place it under their pillow and hope that they will have good luck.  Now today, we just get to enjoy eating some yummy cake at the reception! 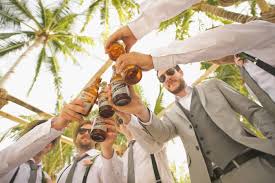 Originally the term “Best” Man did not refer to the grooms best friend, brothers, or comrades. The “Best” was added to the title of the man that was the strongest and most capable of being able to use a sword or weapon to fight off enemies and rival attackers during the ceremony. The “Best” man was also responsible to keep the bride from running away before the ceremony, making sure she didn’t escape and even kidnapping her at times.

Luckily today the honor of “Best” man is a title that goes along with planning the bachelor party, keeping the groom calm, making sure all the groomsmen are present and dressed correctly.  He will also be the one that will need to remember the rings and give a great toast at the reception.  Now, I am sure that the “Best” man is relieved that they do not have to do any of the hard stuff like the “Best” men of the past.

White Dress – Why does the Bride Where White?

This tradition started back in the Victorian era, to bring good fortune to the bride, especially when they were all worn together during the ceremony. The “something old” was worn to connect the bride to her past, “something new” was to signify the start of a new family and life.  “Something borrowed” is to something that would be taken into the new marriage, to bring the new happy couple good luck and good fortune. And then we have the “something blue” represents faithfulness and loyalty to the new union of lives.

There is an often forgotten line that comes at the end of the poem – “sixpence in my shoe” – So what is “sixpence” you might ask, “sixpence” was a former British monetary unit that was equal to six pennies. The “sixpence in the bride’s shoe” was given to her by her father to represent her with good luck just before she walked down the aisle, for extra luck, the coin was from the year that the bride was born. 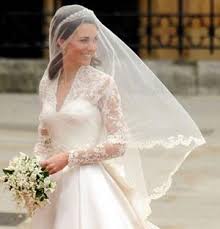 The Veil originated in Ancient Greece and Rome and was used to keep the bride from receiving the “Evil Eye” from a family member that was not overly thrilled with the marriage.  It was later used to confuse evil spirits and even the devil from knowing who was getting married.  As some countries entered the time of “arranged marriages” the veil was used to mask the bride before the ceremony and then she could be “unveiled” to her new husband. Today, thankfully the veil is an accessory that some brides chose to wear and others chose not to.

Saving the Top Layer of the Cake – 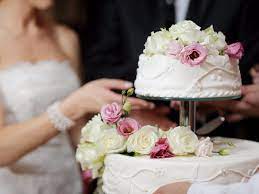 Did you know that saving the top layer of your wedding cake was not originally started for you to be able to revisit your wedding a year later on your anniversary? This longstanding tradition actually is related to the rhyme that you might all be familiar with from childhood – “first comes love, then comes marriage, then comes baby in a baby carriage”. In the past it was customary for the newlyweds to announce that they were expecting a baby by their first anniversary. The top layer of the wedding cake was then used as a celebratory cake announcing the impending arrival of the baby.

And Finally, the Wedding Rings –

The very first documentation of wedding rings date all the way back to the Ancient Egyptians.  The Ancient Egyptians exchanged braided reeds and hemp, then they placed them on the fourth finger of the left hand as they believed that there was a “vein of love” that ran from this finger directly to the heart.

In Ancient Rome and Greece, the ring symbolized that the bride now belonged to someone, and the ring was a dowry for the purchase of the bride.  Thankfully, today, the ring symbolizes the never ending circle of love.  As a ring has no beginning and no end, and the love that you have for your partner also has no ending.